I had the chance to glance upon my good old cartoon favorites, but they all sucked now and I can't bare to watch them fully.  Still these are the cartoons that molded my imagination.  Thanks y'all.  Time to free up space on my hard drive, goodbye!

A 13 episode series about an astronaut (who didn't want to be an astronaut back in the late 70s and early 80s?) that was swallowed by a space black hole.  Blackstar as lucky as snow white was rescued and adopted by dwarves.  Armed with a star sword, together with a female sorcerer and a shape shifter battled an evil overlord who wants to conquer the whatever place they live in.

Power extreme!  The idea of their weaponry was so cool back then, a 3 person army sporting super suits that is lego like. Weapons, jet packs and the like can be beamed down from a command center and gets attached to them. Bizarre, right!  The team battling a sinister cyborg and his dumb right hand borg, ah you know the rest.  The toys fascinated me since my neighbor Jessie had a set, I wanted one but we really can't afford it.  Thanks mama, I really appreciated the time you bought me man at arms and ram man back then from masters of the universe; even if I think of it now I get teary-eyed.

Same creators of thunder cats with the same concept except that they are in space.  Copper kid was my favorite! Wings of silver, nerves of steel, Silverhawks!!

The oldest of the old, even space ghost succumbed to the cartoon network weirdness phase and was revived as a late night show host in adult swim.

Jut like Blackstar but in a barbaric era without the dwarves, using a sun sword instead of a star sword.  This is my childhood friend Arwin's favorite, hmmmm come to think of it I don't know why.  He also liked Martin Nievera's songs when we were in high school, I in turn chose the new wave genre.  We never did influence each other much, he grew up fast hahahahahaha.

People in platforms shooting cables from one mountain to another to reel themselves from one point to another.  Everything was cool even their whatever shaped vehicles was unnoticeable because of the turbo boost like speed or whatever they called it.  I attached a video of the cartoon's opening from youtube, enjoy!

There are a lot more retro cartoon memories, I just hope that the friends that I gave a copy to have not deleted them on their drive so I can retrieve it when I need to.
Posted by Unknown at 12:30 PM 4 comments:

Of Minecraft and Men and DNSs

I succumbed to my boy's wish to get him the PS3 Minecraft game.  Since the game is now so-called old yet still ever so popular, I figured he needs to experience the on-line game himself.  That is thanks to his favorite Minecraft gamer DanTDM (Hello everone, Dan here!) via Dan's Youtube channel. 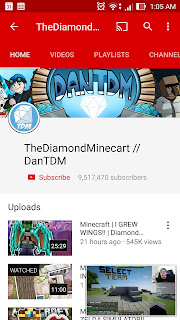 Problem is, we've been encountering update problems from PSN. It has been five days now and to no avail my account has always been getting the sign-in error during updates.  Initially I'm suspecting my internet provider because I got the same problem logging in to PSN last month (which they quickly fixed upon my request, great job!,Twitter is so awesome as a helpdesk channel).  Upon reading numerous forums and unnecessary comments, I luckily stumbled upon a solution that worked.  It was not the ISP nor my router nor my modem, it was the DNS settings. Geeze! but yeah, here you go http://www.psu.com/News/26006/How-to-fix-PSN-80710092-error- Special thanks to the author, you saved the game for us, update 1.23 here we come.
Marcus, Matthew wanted you to have the PS Vita game code so you can meet online, I'll hand the voucher when we meet.  Now that is what you call a bargain; crossbuy, single game, two platforms, one price.
Posted by Unknown at 1:42 AM 4 comments: