I always wanted to upgrade my PSP's custom firmware (CFW) to a higher version but was too afraid to do it myself because of the risk of bricking the hand held device.  But then again no pain no gain right.  I started out asking some shops that offers the upgrade for a price; I just wanted to gather some information on what they use so as I can research on that.  I discovered that I can apply a 6.20 version that has a permanent patch on a psp slim so I worked with that version.  I have two slim PSPs at hand, one having a 3.x version (bleh, my old one) and another that has 5.50 prome-4 version (acquired through a straight cellphone trade).

So here's how I did my upgrade via research

1. I downloaded the PSP Firmware 6.20 update from
http://search.4shared.com/postDownload/lYYOkaP6/PSP_Firmware_620_Update.html 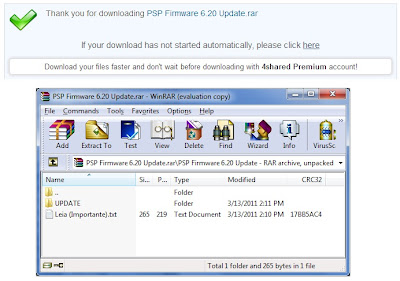 2. Followed the instruction (it's in PORTUGUESE so I translated it using google translate).


3. After the 6.20 firmware update I followed the video from youtube to install the custom firmware 6.20 PRO-B6
http://www.youtube.com/watch?annotation_id=annotation_141800&feature=iv&src_vid=zXojSqgJNjo&v=NFjNgOmbukA


3.4. Applied the patch to permanently set the firmware in CFW, this means that when you shut down the PSP you would not need to apply the patch again and again.

An alternate path: Roadblock!
For my black 2001 PSP, I encountered an error due to the version of the firmware installed.

I keep getting a "Firmware is already 9.90. There's no need to upgrade".  But I easily found a solution: http://www.tjsdaily.com/2011/04/how-to-upgradeupdateinstall-550.html

* text with yellow background were taken from the link mentioned above
You could disable version.txt in the recovery menu of your CFW.

1) Hold SELECT, the VSH menu will appear
2) Look for USB Device, change it from Memory Stick to Flash 0 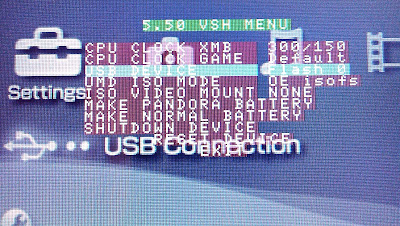 3) Plug your PSP in your computer, open it, scour all the folders and look for a notepad file called version.txt. Find the "9.90" line inside it and change it to "5.50" then save


4) Unplug your PSP, hold SELECT again then return the USB Device from Flash 0 to Memory Stick.

After the alternate steps 1 to 4 were done, I just followed the same steps of updating the CFW


Now I have two newly updated PSPs.  You got to love forums and youtube for DIYs.  I saved myself the pricey labor cost and gained some insights on doing PSP upgrades, I say that's a night well spent on learning a thing or two.
Posted by Unknown at 2:01 AM